As blockchain has emerged onto the world stage, a variety of businesses from Microsoft to  blockchain ecosystem startups have begun experimenting with this new technology. At Olive & Goose, we’ve tracked this development, with special interest near our home offices in Seattle. Seattle seems like it would be a hot bed for blockchain based businesses with Amazon, Microsoft, and other tech giants bringing a variety of talent and infrastructure. However, thanks in part to some missteps in our regulatory environment, the state of Washington has inadvertently stifled blockchain based innovation and is now taking legislative action to correct the damage to our perception in the blockchain community.

The reality is that it’s easy for legislators to make mistakes when imposing rules on budding industries due to a lack of understanding. Due to missteps, the blockchain community has avoided this region despite being one of the biggest hubs for technology in the United States. In fact, some innovators such as ShapeShift left Washington after regulations demonstrating little understanding of how blockchain works were passed which would have needlessly burdened their business. In this particular case, the new regulations would have potentially forced ShapeShift to extract customer data from their blockchain and store it centrally while also paying hundreds of thousands of dollars in “money transmitter fees” that are traditionally applied to businesses such as Western Union. This might have made sense in past iterations of technology innovation. But in the case of distributed ledger and blockchain technologies, this would largely hamstring a company and destroy one of the main use cases for the emerging technology.

The challenge faced by state officials is that the bubbling innovation in fintech does leave massive potential for consumer harm and regulators must seek to protect consumers without curbing innovation. For the most part, their focus lies on the risk of new forms of currency and money transmission. However, Washington has often erred on the side of caution in their interpretation and application of rules. This has resulted in blockchain companies such as Mobius labeling Washington as posing “unnecessary risk” and excluding Washington based investors from their initial coin offering, a popular method for blockchain companies to receive investment similar to an IPO. 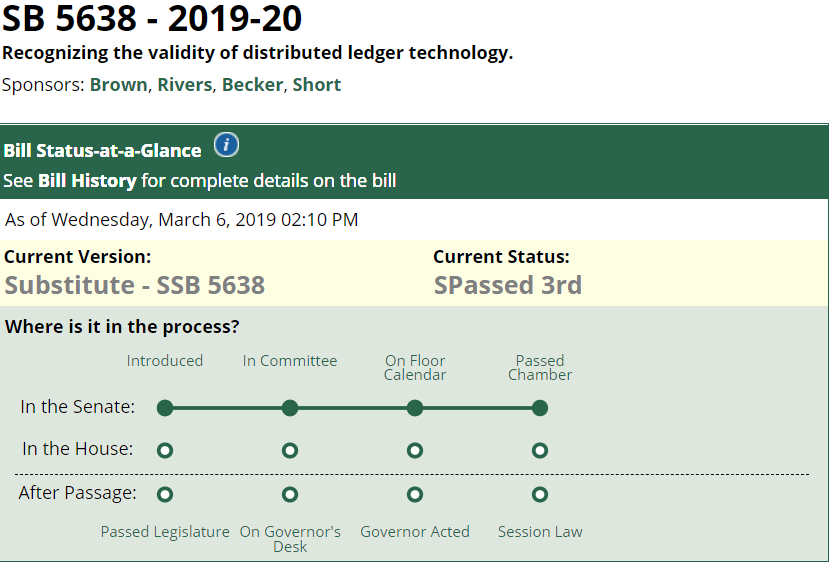 Fortunately, Washington’s legislature is working to re-align certain key regulations as Senate Bill 5638 was unanimously passed out of the State Senate yesterday. The bill would establish and clarify crucial legal definitions for blockchain and distributed ledger technology while allowing for potential innovation in financial technology, something that has Blockchain Technologist and investor Brandon Kite paying attention. “The proposed Washington State legislation will enable a hotbed of legal and fintech innovation.” Kite says. “While some might brush it off as simply a measure to digitize paper onto “blockchain”, legally binding smart contracts go a long way towards enabling new forms of micro-lending, smart securities, or title and property management in tandem with publicly verifiable certifications and licenses of regulated professionals and businesses for consumer protection. Once price speculation simmers, distributed ledger technology could become a valuable component of public infrastructure like water and electricity in states like Washington.”

Despite all of the concern about regulatory requirements, leaders such as State Senator Rueven Carlyle are working hard to ensure a regulatory environment in Washington State that is focused on one key goal: certainty. In regulatory situations, certainty is the most important thing – businesses want to make sure that the rules they’re working under won’t change overnight. Lawrence Lerner, CEO of blockchain-focused venture capital firm Pithia may have explained the current situation in Washington best to Geekwire last year “You know where the guard rails are in Washington state.” said Lerner “Could the messaging be better? Yes.”

In the long run, this approach can and should pay off. Amazon and Microsoft are both exploring blockchain and as the state legislature continues to flesh out and make positive changes to the current strict regulatory framework the environment for blockchain innovation in Washington state can only continue to improve. One of the challenges will be funding – Seattle is hard pressed to match the massive venture capital pools available in Silicon Valley or New York. Therefore, it is especially important that Washington state addresses existing regulatory concerns and attracts new companies as well as the return of old ones that previously left the state.

One option is to follow the lead of states like Wyoming which has passed laws to make it easier for blockchain based businesses to operate in the state. Another is to continue to build upon Washington’s multi-state licensing program which works to make it easier for money services businesses to comply with regulations. The program has expanded, covering more than 16 states last year with a goal of making it so that companies register with one state and that state will take care of typical regulatory requirements such as background checks for all the other involved states therefore speeding up the process.

If Washington state can continue to define and perfect its regulatory environment while finding ways to incentivize continued blockchain based investment in the state, there may be massive opportunities for development of the blockchain industry in Washington. The challenge will lie in rehabilitating a state image that is currently perceived to be heavily regulatory. Here at Olive & Goose, we’re excited to continue our engagement with the Washington blockchain community to promote further innovation and growth.

About the author:
Conor Bronsdon is an Olive & Goose Consultant who has worked with various blockchain companies and is the Chair of the Legislative Action Committee for the Washington Blockchain Coalition.

This website uses cookies to improve your experience while you navigate through the website. Out of these, the cookies that are categorized as necessary are stored on your browser as they are essential for the working of basic functionalities of the website. We also use third-party cookies that help us analyze and understand how you use this website. These cookies will be stored in your browser only with your consent. You also have the option to opt-out of these cookies. But opting out of some of these cookies may affect your browsing experience.
Necessary Always Enabled
Necessary cookies are absolutely essential for the website to function properly. These cookies ensure basic functionalities and security features of the website, anonymously.
Functional
Functional cookies help to perform certain functionalities like sharing the content of the website on social media platforms, collect feedbacks, and other third-party features.
Performance
Performance cookies are used to understand and analyze the key performance indexes of the website which helps in delivering a better user experience for the visitors.
Analytics
Analytical cookies are used to understand how visitors interact with the website. These cookies help provide information on metrics the number of visitors, bounce rate, traffic source, etc.
Advertisement
Advertisement cookies are used to provide visitors with relevant ads and marketing campaigns. These cookies track visitors across websites and collect information to provide customized ads.
Others
Other uncategorized cookies are those that are being analyzed and have not been classified into a category as yet.
SAVE & ACCEPT